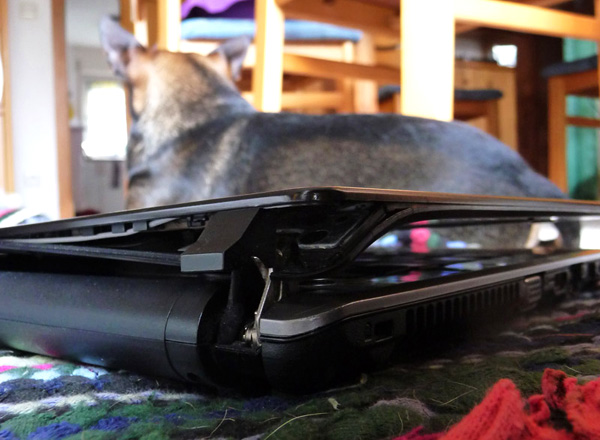 I’d like to introduce to you my great companion for work and free time, my notebook “Acer Aspire TimelineX 4820TG”. As you can clearly see in the photo above, my notebook has certainly seen better days. The best days shortly after I unwrapped it from its retail packaging. After that, it went steadily downhill — with an astonishing pace.

That Acer notebook is a mere one-and-a-half years old. Not even passed its warranty and already falling apart. The hinges attaching display and notebook body are simply being obliterated by everyday use. The left one gave up first, starting with a gap between the plastic shells, going on to reveal more and more of the innards. Now when I close my notebook, the back and front sides of the display are torn apart. At some point it might even break the whole bottom left corner of the screen clean off. The right hinge is slowly suffering the same fate, showing small gaps and giving loud cracks when the display is opened and closed. I don’t have to tell you how truely displeased and utterly frustrated I was when I found out about those issues.

They told me so

At this point, all the voices of from my friends and the countless internet users come to my mind, talking about that infamous Acer quality. Now, I have to grant them this point. I shed out a whopping 750€ for that notebook. For not much more I would have gotten a Macbook Pro with its infinitely superior build quality, but alas, I was too much a cheapskate. My brother even is still using his 5 year old Thinkpad. It’s entirely discouraging to see mine fall apart after a fraction of that time.

Best bang for the buck

So why did I in fact settle for an Acer? Well, Acer manages to offer astoundingly capable hardware for affordable prices. But you pay with quality. I didn’t expect it to be that bad. But Acer’s eagerness to save another buck doesn’t stop there. It is a no-brainer to assume the same for their customer support. Simply put, their support pages are a mess. Showing a mix of German and English, I have to struggle through their horrid and cryptic support forms.

Here are some cryptic options for the damage report. My favourites are the various cosmetic damages for things I never believed they could have such an issue, things like Memory or HDD Cosmetic Damage. I don’t even know what half of those actually mean. What is a broken FDD bezel? Another funny thing is, this list was taken from a German web form, but two thirds turn out to be broken English. Then also this rage capslock. MECHANICAL BROKEN anyone? I don’t even know what “MC” means! Multiple Choice maybe?…

I even had to pay the shipping fee myself. Acer also successfully deterred me from calling their support hotline because they want to charge me a hefty 1€ per minute for it! Their hotline, the only way to contact a human being at Acer — a support email address doesn’t even exist.

Registering an account at their website to register my product and supposedly activate my warranty, was totally pointless as well. I ended up sending them a mail to order the deletion of my personal data because there was not even an option to turn off their newsletters or delete my account. That website doesn’t serve any other purpose than collect user data and spam mails.

Acer, the next Apple

In perspective of their shrinking profit margins for low-budget devices, Acer stated, they attempt to be more like Apple in terms of quality and profitability. I really don’t see how they can pull that off. Stuck in my situation, I’m torn between tears and laughter.