Just now I got an email from Dropbox, a free online solution for syncing files with your workspaces, that reads this:

How have you been? The last few months have been pretty crazy at Dropbox, and we thought we’d fill you in on what’s been happening.

Download the New Dropbox Mobile Apps
With the addition of iPhone, iPad, and Android mobile apps, access to your Dropbox is never far away. Start work on a document at the office, add a paragraph on the bus, and polish it off at home. You can also save pictures and video directly to your device, stream media from your Dropbox, and export files to other apps.

Dropbox apps are already available for the iPhone, iPad and Android devices, on their website we see a small “coming soon” phrase under the Blackberry logo.

What exactly is Dropbox?

For everyone who is yet unfamiliar with this handy service should listen up, because this is certainly worth to at least have a look into. As already mentioned, Dropbox is a sync solution for multiple workspaces, wherever you are, you just need an Internet connection. It’s storage is located in the Amazon S3 Cloud, which is immensly fast, from every location of the world. Dropbox also provides a sleek and fast webinterface as well as a desktop software (and mobile apps), to make syncing as simple as possible. The desktop software blends in perfectly into the native file explorer, and you can quickly sync your files and folders by simply drag&drop’ing them into the dedicated Dropbox Sync folder. 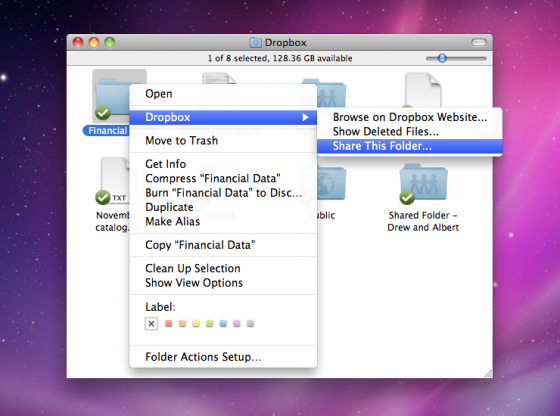 The best of all this: Dropbox is completely free to use! In fact, it gives you the choice whether to use the free version with 2GB of storage size or upgrade it to premium sizes of 50GB or 100GB. If you think 2GB are still not enough for free, no problem! Dropbox provides a great referral system, which just got revamped in  favor of us users: Every Dropbox user can invite others to Dropbox through a referral link, and after completion of a few registration steps both users are granted an additional 250MB of storage. This can go up to 10GB now (initially just 5GB). So if you got curious about it, follow my referral link *twinkle*.

So, Dropbox just published their new mobile apps, and if you are a bada user like me, you’d still not be that happy about it since bada is not yet supported, as it isn’t with many other interesting apps as well. Dropbox provides the Votebox platform to communicate with us users, and there is already a vote running for a bada application. So if I got your mouth all watery, you might want to check this out, too.